Is this how we PRIORITIZE?

Although one might think I have disappeared yet again from the world of blogging, let me quickly explain that I was merely in Hiding and getting all geared by to face certain personal demons both inside me and OUTSIDE ME! No pun intended! :P

But a certain piece of information that I heard about PUSHED me out of my hiding place and forced me to give my opinion, judgment and a piece of my Mind! I have just come across this news of two Emirati nationals... girls, Hanan Al Rayes and Asma Al Muhairi, who have launched a Twitter "campaign" to URGE expatriates and tourists to "respect" the cultural sensibilities of the United Arab Emirates regarding DRESSING. In fact it seems their campaign pushed the Federal National Council to propose a law regarding dress code. *Smacks the face* 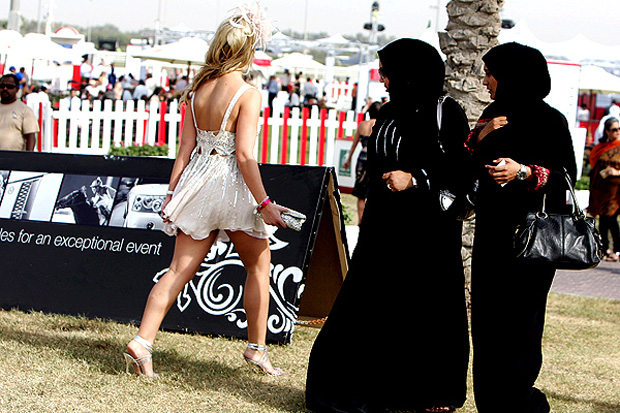 Wait wait... it doesn't end there... "Some Emirati activists want to protect the local culture from being RAVAGED by Western habits in the country's cosmopolitan society. While the Emiratis have preserved their local dress, they want to ensure a minimum level of decency in public places." PLEASE! Where have you, my fellow Emirates been all this while?? Were you all, like me,  in HIDING as well?  Or where you all drugged? Why the sudden interest in DRESS code? There have been many many incidents in the past where we have seen scantily clad GENTS (Ohh yaa... seen many of them mind you, let's not JUST blame the Fairer sex!) and ladies, in and around the hotels, malls, souqs, and even extremely crowded streets in Karama, Satwa and Bur Dubai. Nothing... Absolutely nothing was done then, so why now?

FORCING a Dress code on the expats in UAE NOW, is according to me very unintelligent! Someone told me, "Of course we can do that, why not? If I were to come into your house and start smoking and walking about with dirty slippers, wont you tell me not to do that??" Of course I WOULD! But I would tell you from Day one and not after waiting for years on end, making them feel extremely comfortable in what they were doing and then all of a sudden decide to IMPOSE my "Changed Mind frame" on them! Yes I say changed, because till now No one seems to make such a HUGE hue and cry about it so why NOW? 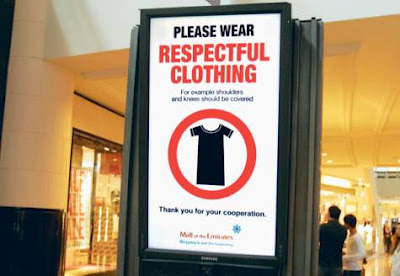 See I am all for the awareness signs were put in malls to urge shoppers to follow certain dressing guidelines, But with how effective these are... I really don't think these are going to make any difference.

In the past few years when all shopping malls here turned into major destination for shoppers and tourists, the issue of how men and women APPEAR in public began to gain a much greater attention. Mall entrances have come to carry signs and instructions relating NOT only to trash, pets, bicycles and skaters, but *dress codes* as well. The idea of modesty does not have a clear definition; (As goes the idea of ethics... Then again a different ball game altogether, which I shall address later.) I would like to think it just refers to wearing clothes that do not resemble wearing a swimming suit!  But at the same time in bars and night clubs, people can wear whatever they want, and there is no one that polices them there. On beaches, on the other hand, people who wear FULL clothes are not allowed to just sit and watch beach goers, because it is quite OBVIOUS that their goal is to watch rather than swim and this is considered an invasion of people’s privacy! 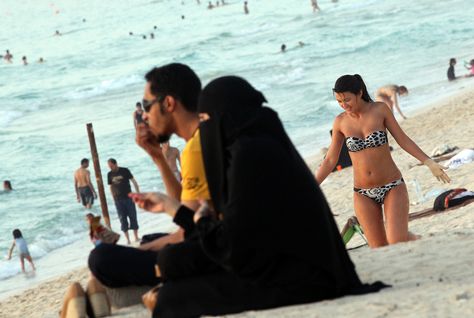 Why is that *foreigners* in particular should abide by such rules?? It is a question of personal freedom, and everyone should be FREE to do whatever they want in a city that opened its doors to every nationality in the world!!! Which boasts of being a melting pot of different cultures and ethnicities, a global Village if I may.

As I was going through some of the tweets, I realized that it has to some degree become inherently very racist and sexist towards WOMEN and *foreign* women in particular, stressing on the point that “the campaign aims for respecting the culture and dressing decently,”. Using words such as “repulsive” and “uncivilized” brings the question of how women are looked at in this part of the world,  giving the sense that they are judged from the outside!!! How can we Judge someone and use the word "Uncivilized" to describe someone's dressing sense? What is Civilized? Is being civilized covering ourselves completely and not even showing our faces? If being civilized lifting a veil covering our faces so that we can EAT? If we are to go there then there will be a huge uproar , so I rather NOT!  But something that the ladies in question, who have worked on the campaign, need to pay heed to is keep the discussion more open!!

Rather than focusing on how “immodest” women’s clothes appear, it would make more sense to stress on the openness of the Arab-Islamic culture in the UAE, and the tolerant nature of the community here, and how important it is for everyone to understand the values and culture of the other. Instead of using an “offensive” campaign that represents women in “an unpleasant way,” it would be much better to use a discourse that attracts people to the culture rather than creating hatred for it.

But What I feel is that such campaigns should really try NOT to push things too far for visitors, and create an environment that is HOSTILE towards its people, but to have a tolerant atmosphere, in which everyone understands each other’s values and cultures, be it Emiratis, or any other nationality.

I believe pushing for any law that defines "what people should wear in public" is not a going to lead to great results, because at the end of the day, the Emirate does not want to turn in to a strict ruled city, as this would affect its commercial and touristic image worldwide.

More importantly wouldn't it be wiser to focus our joined energies on increasing ROAD SAFETY, Pushing for the cause of using Baby Car SEATS, work on reducing ROAD RAGE?? In 2011 alone 720 people were killed and over 7800 injured in road mishaps!!! Are Clothes and Dressing Sense Really THAT Important that it supersedes HUMAN LIFE??

Frankly I don’t understand why people are offended by seeing someone in clothing they personally would not wear. If we are to go by the Same logic as these women then it should be absolutely okay for a French person to be offended at the sight of a woman in niqab or hijab.

LIVE and let LIVE, people!!!
Posted by Neelanchana Kumar at 12:09 PM No comments: